Ireland has voted overwhelmingly to extend civil marriage to same-sex couples. In doing so, it became the first country in the world to pave the way for the introduction of marriage equality by way of a public referendum. It was an historic occasion without question, hugely important for the LGBT community and for the advancement of human rights and equality more generally, and something to be very proud of.

Many factors contributed to the YES vote succeeding – the commitment and enthusiasm of campaigners, a high voter turnout, the #hometovote phenomenon, social media, endorsements from all the political parties, as well as what might be an ever-growing support for human rights and equality more generally by people in Ireland. Another factor that is worth considering was the backing of the YES campaign by a number of businesses, both small and large. 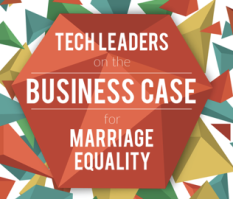 Support for the YES side came from some of the world’s largest social media and technology companies, a great number of which have their European Headquarters in Ireland. This included Google, Microsoft, Facebook and e-Bay. Twitter also backed the YES campaign for marriage equality, with Stephen McIntyre, Managing Director of Twitter Ireland explaining that:

Twitter is supporting a Yes vote because of our company’s commitment to inclusion and the strong business case for marriage equality. We encourage other companies to do likewise.

Ben & Jerry’s supported the YES side by rebranding one its ice-creams. The position adopted by many of these multinationals replicates the stance they have already taken regarding marriage equality in the United States, where dozens of companies have argued that recognition of same-sex marriage is a “business imperative”.

It wasn’t just the large multinational companies though. Many small and medium sized enterprises backed the YES vote in various ways, by fundraising for the campaign, hosting events or displaying YES posters. The Irish Business and Employers Confederation (IBEC) public stated that support for marriage equality was “good for business, good for employees and good for Ireland”, although the Irish Small and Medium Enterprises Association (ISME) did not come out in favour of a YES vote. For smaller Irish businesses, backing the YES campaign was probably more a reflection of the outlook of owners and staff, rather than a conscientious business-orientated decision (although one small business did suffer for a recent stance against same-sex marriage).

GLEN, the Gay and Lesbian Equality Network, played a key role in getting business on board, with its Business for Yes campaign, and its broader Diversity Champions initiative. It has put forward the business case for diversity in the workplace based on organisational reputation, compliance and risk management, staff performance, retention and recruitment. David McWilliams argued that a YES vote would be good for the economy, given the “strong correlation between tolerance and wealth”. And following the referendum, the Irish Examiner ran a lead story regarding Government plans to tap into the “$200bn gay spend”. There is little doubt that there is a business and economic aspect to the issue.

For a narrowly focused campaigning organisation like GLEN, it would obviously seek to garner support from all quarters in order to advance LGBT equality. Making a business case for marriage equality seems to have made sense in the Ireland of today, but it is highly unlikely that it would have been endorsed by large multinational companies or business representative organisations a few decades ago. It is doubtful also whether such companies would promote LGBT rights so openly in other countries where they operate, and where homophobia is rampant and often institutionalized.

The multinationals which backed YES did so as very large and very public companies, for whom their brand recognition and public image are especially important. They were also backing the right horse to some extent. In a recent New Yorker article, Richard Socarides described the evolution of corporate support for LGBT issues in the United States, and how only a couple of decades ago, there were “very few takers” for Bill Clinton’s gay rights initiatives, as compared with today. A majority of companies in Ireland chose not to take any position on the referendum.

This is not to say that business should not be recruited in the context of advancing particular human rights, but rather that the business approach to social issues is highly selective and subject to business realities. Amnesty Ireland, who firmly backed the YES campaign, have expressed their concern about overstating a business case for human rights:

the business case for respecting human rights is unclear. It is evident that … abusing human rights can be very profitable for companies. Linking human rights with successful business also risks undermining the moral argument that businesses are a part of wider society, and should respect the Universal Declaration of Human Rights.

Companies which backed the YES campaign for marriage equality in Ireland have less than exemplary records in relation to other human rights, including privacy, data protection and the rights of workers in their supply chains. Business representative organisations have almost as a matter of course opposed increases in the minimum wage or enhanced protections for the right to collective bargaining and to strike. On LGBT issues, some companies have advocated for “conscience clause” legislation, which could amount to legally permitting discrimination.

The relationship between business and human rights is a complex one, but few would question the view of the United Nations that companies have a responsibility to respect humans rights. When it comes to business promoting human rights and campaigners making the business case for certain rights issues, we need to be a little circumspect and aware of the limitations of these approaches. Glenn Greenwald has written of the exploitation of social issues, such as LGBT rights, for purposes of militarism and imperialism, and in the aftermath of the marriage equality referendum, it has been said that corporate Ireland will try to “milk a YES vote shamelessly”.

The YES victory was a truly momentous day for Ireland, but we shouldn’t hold our breath in terms of expecting business to voluntarily embrace the full range of human rights and equality issues. The positive progressive image that may have been generated for companies which supported the marriage equality campaign should not deflect from the importance of ensuring that business respect for human rights and equality is a legal requirement, and not a business choice.