Last week I participated in Christian Aid Ireland’s conference ‘The Human Rights Impact of Tax and Fiscal Policy’ in Dublin. It was an excellent event, with the keynote speech by the UN Special Rapporteur on extreme poverty and human rights, Professor Philip Alston, generating much-needed media attention. I spoke on a panel that looked at tax issues in the context of the sustainable development goals and business and human rights. With tax avoidance so prominent at the moment, I thought it worthwhile to reprint my remarks here.

My thanks to Sorley McCaughey of Christian Aid for the invitation to speak – he has asked me to speak about the issue of tax, specifically corporation tax, in the context of the business and human rights agenda. I would like to begin by discussing business and human rights, and how it is related to, but can be distinguished from corporate social responsibility, before turning to the extent to which corporation tax has featured within the agenda to date. I hope to address what the business and human rights agenda may add to the discussion of tax and fiscal policy, and their impact on human rights (as Prof Alston has already outlined) – in particular, its focus on the responsibilities of both States and companies in this context.

What is the business and human rights agenda?

Over several decades, there have been attempts to devise international standards and mechanisms aimed at holding companies, especially multinational companies, to account for activities that violate human rights. The 1990s saw increased attention on this problem, given high profile examples involving sweatshops, child labour and environmental damage by oil companies.

Most recently, the Human Rights Council adopted the UN Guiding Principles on business and human rights, following a lengthy consultation process by Special Representative John Ruggie. The Guiding Principles are based on three pillars:

The Guiding Principles are not an international treaty, and do not create new legal obligations. However, they reaffirm that a State’s existing human rights commitments require it to protect from violations by others. For companies, their responsibility is based on the basic social expectation that they respect human rights. This applies thoughout their operations, and guidance is provided as to how this may be done, in particular by undertaking due diligence to avoid potential negative human rights impacts and to address those with which they are involved. The right to a remedy is key.

The Guiding Principles are an authoritative statement of how States and companies can address corporate activities that might violate human rights. A number of States, Ireland included, are in the process of developing a national implementation plan for the Guiding Principles, something which both the Human Rights Council and European Commission have called for. Discussions are also underway in Geneva about a potential international treaty on business and human rights.

Corporate social responsibility, in contrast, can be characterised as voluntary business-led attempts to address social and environmental issues in their operations. In response to public or consumer pressure, companies choose particular issues to focus on and accordingly CSR is not underpinned by a particular set of universal principles (such as human rights), although some international initiatives and indeed corporate codes of conduct refer to specific human rights or international instruments. The European Commission defines CSR as “the responsibility of enterprises for their impacts on society”.

Given the dominance of CSR in recent decades, it is worth considering whether taxation has featured in the social and ethical commitments made by companies. The short answer is no – a recent study shows that the issues of tax payment and tax avoidance “have largely been absent from the CSR agenda”.[1] And as Jenkins and Newell have pointed out, this is despite the fact that tax scandals have often involved multinationals who see themselves as corporate social responsiblity leaders. Accordingly, we have these CSR statements that ring hollow given the tax practices of many companies. David Scheffer, a former US ambassador, described tax avoidance as the “true nemesis” of meaningful corporate social responsibility.

The most notorious example in this context is probably Apple, a company that boasts of its environmental and supplier responsibility, emphasising the rights of works to a health and safe working environment. It has been well-publicised that Apple subsidiaries in Ireland paid corporation tax rates far below 1% and, for one subsidiary, no tax here or anywhere else. When The Observer reported on Apple’s record-breaking profits last week, it described Ireland as more a “facilitator”, than a “beneficiary” of the company’s success.

Another US multinational with operations here, Boston Scientific claims in its CSR mission statement to be “a good corporate citizen”. The Irish Times reported a couple of years ago that a holding firm of the company paid an effective tax rate of just 4% corporation tax in Ireland on profits of $1.6 billion.

The accounting firm, PricewaterhouseCoopers, also speaks about its corporate responsibility, and the “signigicant role” it has to play “in building trust in society and solving important problems”. But as the Luxembourg leaks show, it helped hundreds of companies avoid tax – “on an industrial scale”, according to the House of Commons Public Accounts Committee.

In light of the recent HSBC scandals, it is hard to take seriously the bank’s claim that it recognises its responsibilities towards “customers, employees and shareholders but also to the countries and communities in which we operate”. Given the scale of corporate tax avoidance, the proliferation of such CSR statements and policies have been described by Prem Sikka as “organised hypocrisy” (although, as Jenkins and Newell have pointed out, companies themselves have not tended to refer to tax in the context of CSR).

The few references to tax in CSR statements usually just focus on requirement of meeting national legal obligations. Vodafone’s tax strategy sees tax as part of its corporate responsibility, but notes that it is not possible to determine a ‘fair’ amount of tax – the company must follow that as set by governments. It also mentions its obligation to maximise shareholder value.

Barclays, recently embroiled in a tax avoidance scandal, now has several ‘tax principles’ as part of its responsible citizenship policy. However, “most major companies do not currently regard tax as an aspect of CSR”, perhaps because CSR has tended to exclude activities that “are central to company profitability” and competitiveness.[2]

The making of this is connection is important, but it treats tax as a legal compliance matter only, and because of the oft-repeated claim that tax avoidance is legal, this approach does not press companies to think about the social impact of avoiding tax. As the International Bar Association has put it, “[m]erely complying with tax law is not enough when this results in the violation of human rights”.

Businesses should undertake measures to promote fair taxation of their revenues, including non-resort to tax avoidance schemes and prohibition of any tax evasion practices.

This high profile but voluntary and weak initiative has proven unsuccessful in the areas it does cover, and adding tax may generate more publicity, but could deflect from more meaningful measures.  While taxation may feature more prominently in CSR, it has been said that given the limits of this approach, “a regulatory approach is required in order to ensure compliance across the board”.[3]

Taxation did not feature in the work of the Special Representative John Ruggie, which culminated in the UN Guiding Principles on business and human rights, and is not mentioned in the Guiding Principles themselves. That said, it can be seen to logically fit with the framework.[4] Susan Ariel Aaronson and Hugh Higham have said that “the corporate responsibility to pay taxes, which essentially are investments in public goods, is a key, albeit missing, element” of the Guiding Principles.[5]

Nonetheless, the UN Working Group on business on human rights established has not highlighted tax as a prominent issue, and the handful of existing national action plans do not address corporation tax, although the Dutch plan does supports for “the growing number of international initiatives to promote transparency by means of tax disclosure”.

Although tax is not explicitly mentioned in the Guiding Principles, UN experts and civil society organisations are increasingly drawing on them. Foremost has been Prof Alston’s predecessor as Special Rapporteur on Extreme Poverty and Human Rights, Magdalena Sepúlveda Carmona. In her final report, she noted that “business enterprises are … crucial actors in the area of fiscal policy”. She sees the state duty to protect as requiring regulation of business enterpries, including accounting firms, so that they do not participate in or facilitate tax abuse. For companies, the Special Rapporteur emphasised their responsibilities under the Guiding Principles:

Business practices that avoid taxation may breach their responsibility to respect insofar as such actions have a negative human rights impact. […] business enterprises that knowingly avoid paying tax are purposefully depriving countries of the resources they need to fulfil their human rights obligations.

In addition, NGOs are paying increasing attention to tax in the context of business and human rights, including the International Bar Association, the Institute of Human Rights and Business, and the Business and Human Rights Resource Centre.

A key element of business and human rights is the requirement that companies undertake take due diligence in order to avoid rights abuses and to “address adverse impacts with which they are involved”. This aspect has been incorporated in the 2011 revision of the OECD Guidelines for Multinational Enterprises, which now includes a human rights chapter based on the UN Guiding Principles. These are addressed to companies directly, while also noting the role of the State, and also include a separate chapter on taxation. The OECD Guidelines emphasise how they are “voluntary and not legally enforceable”.

On taxation, multinational enterprises are not required to pay more than legally required, but should comply with the “letter and spirit of tax laws”. There is no reference to tax fairness or linkage to the human rights impact of tax avoidance. In fact, the recommendation that companies conduct risk-based due diligence regarding actual and potential adverse impacts of their activities or business relationships, explicitly does not apply to the chapter on taxation.

If it did, companies would have to try to assess the human rights harms caused by tax avoidance – while it is unlikely that any clear causation might be found between a company’s tax practices and a specific violation, such an approach would help show the broader, cumulative and negative impact of tax avoidance. Tax avoidance is one of the major structural challenges for human rights – companies have claimed and are expected to have human rights responsibilities – but large scale tax avoidance is facilitated by an international order which at times seems to work against, rather than for, the realisation of human rights. 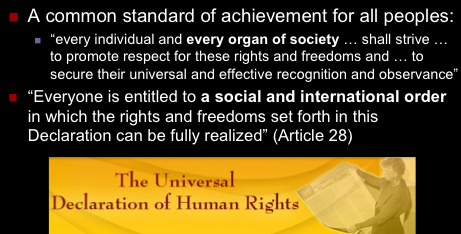 The increased attention to taxation within the business and human rights context, alongside the harnessing of human rights concepts more generally, is to be welcomed. While CSR often sees the State take a back seat, the business and human rights approach views corporations as having a responsibility to respect human rights, with a parallel duty of States to protect human rights. Both are key players when it comes to tax avoidance, and human rights can provide a base from which to assess the fairness of tax laws and policies, especially if the current political appetite for action were to change. The requirement of due diligence could play an important role here. In addition, companies are required under the Guiding Principles to avoid undermining a State’s ability to meet its human rights obligations – lobbying for corporate tax incentives comes to mind here.